Minnesota has long been distinguished as one of the healthiest states in the country, and the rates of tobacco use in the “Land of 10,000 Lakes” are no exception: about 89% of Minnesota homes are smoke- 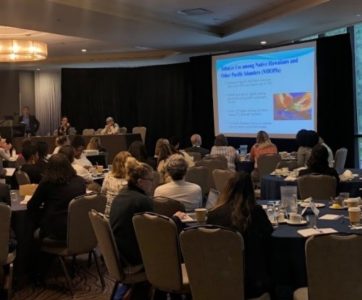 free, and the state passed one of the highest tobacco tax hikes in history – an increase of $1.60 – in 2013. The comparable statistics on a national level paint a different picture, as about 58 million nonsmokers in the U.S. are exposed to secondhand smoke that often occurs at home, and the cigarette tax rate is lower than 50 cents in five states.

To address these challenges, thousands of tobacco control professionals gathered at the National Conference on Tobacco or Health (NCTOH) in Minneapolis, MN in August. Conference attendees spent the week learning about best practices and policies to reduce commercial tobacco use – the leading preventable cause of disease and death in the United States.

I was given the opportunity to attend NCTOH not only as a first-time attendee, but as a young professional who is new to the field of tobacco control and prevention. When I joined the staff at the National Behavioral Health Network (NBHN) this summer, my knowledge of this work was limited to the general statistics around the harmful effects of smoking on one’s health and well-being. Through my continued involvement in the network, I have learned that tobacco control is comprised of countless intersections – many of which that were addressed and discussed at NCTOH.

The NBHN team contributed to sessions at NCTOH that covered topics spanning strategies for reaching priority populations through Quitline services, operationalizing health equity in state programming, and billing state Medicaid programs for tobacco cessation services. A common thread underpinning all the sessions was an emphasis on the role that health disparities plays in tobacco control – which was exemplified through the CDC’s “Networking2Save” sub-plenary session that described the 9 CDC National Networks (including NBHN) who are moving the needle forward on linking best practices in public health and addressing the considerations of special populations when planning and executing tobacco control activities.

Overall, NCTOH was a great opportunity for a diverse group of people who have a passion for learning about the latest evidence in effective strategies to combat tobacco use. Conference attendees left Minneapolis at the end of the week with new connections and a re-invigorated commitment to applying these strategies on the ground in their workplaces, clinics, homes and communities.

To learn more about NBHN and gain direct access to free resources, trainings and conference scholarships, visit BHtheChange.org or email us at bhthechange@thenationalcouncil.org.

Resources to check out