It was the 1960’s — walking into your local pharmacy usually meant getting an ice-cold soda pop or a pack of cigarettes, not your prescription. In the same decade, with increased evidence of the ill effects of smoking and rising public awareness, the U.S. Surgeon General released the first report (1964) to examine the health consequences of tobacco use. The report had a significant immediate and long-lasting impact on public attitudes and policies towards smoking, however addictive properties of nicotine were not fully understood at the time and finding effective remedies presented a challenge. Despite research and awareness, the youth of the 1960’s are now older adults in their mid-sixties and older– many of whom are long-term heavy smokers. 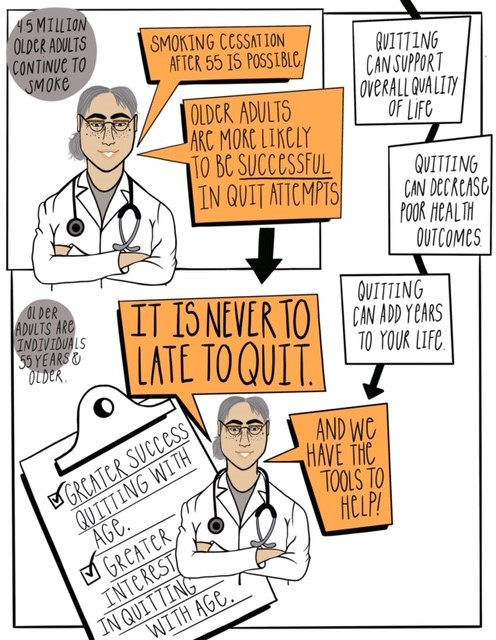 In the United States, nearly 4.5 million adults over the age of 60 continue to smoke, and they account for 70% of all deaths related to smoking. Since the 1960’s (and particularly after the Report of the Surgeon General: 1964 Report on Smoking and Health) there has been significant advancements in tobacco research, control, and cessation efforts; however, tobacco use remains  the leading cause of preventable disease, disability, and death.[i]

Older adults who experience greater health challenges with aging and psychological distress, including behavioral health issues, are more likely to be open to quitting.[iv] Research has shown that while older adults are less likely than younger smokers to attempt to quit, they are much more likely to be successful in the cessation attempts they do make, for example:

It is important for behavioral health providers to remember that smoking cessation beliefs and barriers in older adults can be unique including[viii]:

One of the largest challenges around tobacco cessation in older adults is low use of existing cessation programs. Additionally, public smoking restrictions, such as community wide smoking bans,  may not have the same impact on the elderly as they do on their younger counterparts due to such policies affecting areas that older adults do not frequent as much (restaurant, bars, work places).[ix]In addition to tailoring cessation efforts towards an aging demographic, targeted cessation efforts should also be inclusive of home, clinical and housing related interventions. For example, cessation support are critical in public housing which serves over two million residents, of which over 329,000 persons are over the age of 62 (16%). Thirty three percent of HUD residents are also current smokers[x], which includes older adults and there is significant room for behavioral health providers to support them.  A few additional resources include: 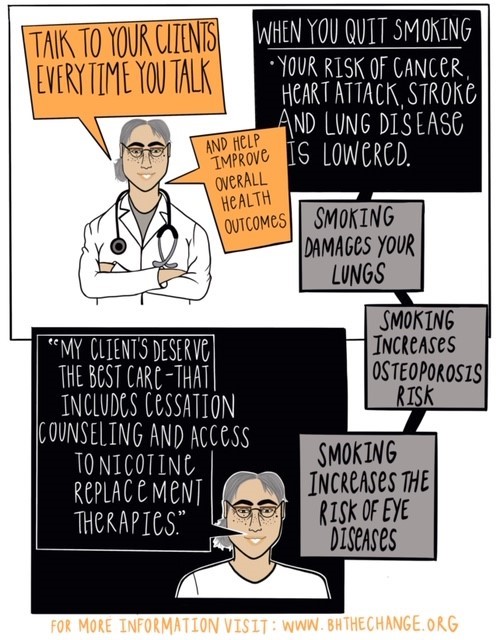 [i] (2019, February 25). Burden of Tobacco Use in the U.S. | Data and Statistics | Campaign Resources | Tips From Former Smokers | CDC. Retrieved April 11, 2019, from https://www.cdc.gov/tobacco/campaign/tips/resources/data/cigarette-smoking-in-united-states.html

7 Tips to Enjoy the Holidays Smoke-Free