A research article first published by the American Cancer Society January 31st 2018 studied which subpopulations continue to smoke. The study reported that smoking among individuals with a serious psychological distress accounted for two-thirds of the difference in life expectancy relative to nonsmokers without a serious psychiatric disorder. 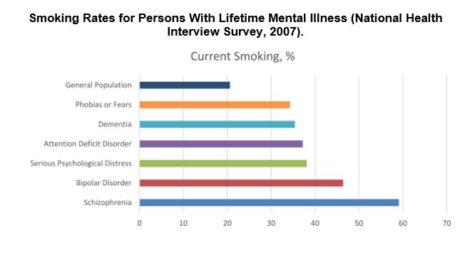 The continuing high prevalence of cigarette smoking among specific subpopulations, many of them vulnerable, is one of the most pressing challenges facing the tobacco control community. These populations include individuals in lower education and/or socioeconomic groups; from certain racial/ethnic groups; in the lesbian, gay, bisexual, and transgender community; with mental illness; and in the military, particularly among those in the lowest pay grades. Although traditional tobacco control measures are having positive health effects for most groups, the effects are not sufficient for others. More attention to and support for promising novel interventions, in addition to new attempts at reaching these populations through conventional interventions that have proven to be effective, are crucial going forward to find new ways to address these disparities.

The report specifically studies people with mental illness, among other subpopulations:

There is also significant variation among different mental illnesses, as illustrated in Figure 6.[4-6] For example, nicotine addiction has proven to be particularly challenging for many suffering from psychiatric disorders, such as schizophrenia.[24] Smoking prevalence was highest among those with schizophrenia, at nearly 60%. Individuals with such disorders may also experience additional risk factors, such as the easy availability of tobacco in some treatment centers.[25]

Read the full article at the American Cancer Society’s A Cancer Journal for Clinicians.

Study: Serious Psychological Distress as a Barrier to Cancer Screening Among Women

Tobacco Smoking Among People Living with a Psychotic Illness: the Second Australian Survey of Psychosis

Study: Tobacco Use and 12-Month Suicidality Among Adults in the United States