It’s a statistic you’ve probably seen before.  Individuals with serious mental illness die, on average, 15 to 30 years younger than those individuals without.  What you may not know is that this difference represents the largest health disparity in the US.  It’s larger than the gender, racial and socioeconomic gap in mortality.  And unlike some of the other gaps that have begun to slowly close over the years, this gap isn’t shrinking.

Like most questions related to health, the answer involves a complex interplay of many factors. 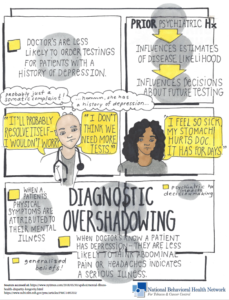 From Dr. Lisa Rosenbaum, as quoted the New York Times: “Many of us have internalized the directive to seek a test or procedure only if ‘there’s something you can do about it.’ For mentally ill patients with medical illness, however, this principle often justifies doing nothing.”

What Can Be Done?

Unsurprisingly, the solution is multifaceted and still developing.  Below are a few things that health professionals can do.

For more information on how to reduce implicit clinician bias, take a look at this article from the Institute for Healthcare Improvement.

Count Down to Quitting

A hidden epidemic — among smokers with mental illness

Substance Use Disorders and the Person-Centered Healthcare Home

There are no upcoming events at this time.