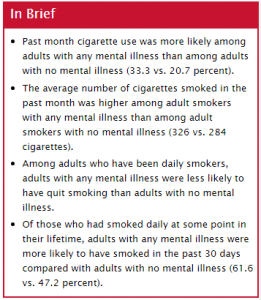 NSDUH is the primary source for statistical information on illicit drug use, alcohol use, substance use disorders, and mental health issues for the U.S. civilian, noninstitutionalized population aged 12 or older. One of NSDUH’s strengths is the stability in the sample and survey design that allows multiple years of data to be combined to examine the behavioral health of specific subgroups, such as smoking among people with mental illness. NSDUH asks people aged 18 or older if they ever smoked part or all of a cigarette. Respondents who had smoked are asked if they smoked in the past 30 days, the average number of cigarettes they smoked on days they smoked in the past 30 days, and if they ever had smoked daily. NSDUH also has an indicator of having had any mental illness (AMI) in the past year. AMI among adults aged 18 or older is defined as having had a diagnosable mental, behavioral, or emotional disorder (excluding developmental and substance use disorders) of sufficient duration to meet diagnostic criteria specified in the fourth edition of the Diagnostic and Statistical Manual of Mental Disorders during the year before the survey interview.9 Estimates of AMI are based on predictive models.10 An estimated 18.1 percent of adults had AMI in 2014.11