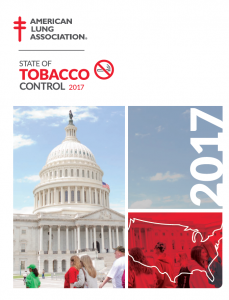 The American Lung Association’s 15th annual “State of Tobacco Control” report finds that much more needs to be done to prevent our nation’s youth from a lifetime of tobacco addiction. The report shows that some key actions were taken at the federal and state levels to prevent and reduce tobacco use in 2016, but much more must be done to protect the public from the harms of tobacco use and secondhand smoke. The “State of Tobacco Control” report released annually, grades state and federal government policies to prevent and reduce tobacco use. The report was expanded this year by adding a section on “Tobacco 21” laws, which involve raising the minimum age of sale for tobacco products to 21.

“Tobacco use remains the leading preventable cause of death and disease in our nation and it’s no mystery how to end the tobacco epidemic – enact proven-effective policies,” said American Lung Association National President and CEO Harold P. Wimmer. “This year’s ‘State of Tobacco Control’ report shows federal and state policymakers have failed to implement lifesaving measures to help smokers quit and reduce tobacco use.”

The report celebrated the long-awaited release of the U.S. Food and Drug Administration (FDA)’s final rule—known as the “deeming” rule—giving FDA oversight over all tobacco products including e-cigarettes and cigars. However, the federal government still earned an “F” under FDA Regulation of Tobacco Products for the failure to require graphic warning labels on cigarettes as well as the failure to move forward on issuing a rule to end the sale of menthol cigarettes nationwide – despite the recommendations from an FDA expert advisory committee.

The federal grades include a “C” for Federal Coverage of Cessation Treatments – even though the Obama Administration did not issue the necessary guidance for quit smoking coverage for private insurance plans – and an “F” for the low Level of Federal Tobacco Taxes. A “B” grade was earned for federal Mass Media Campaigns including the Centers for Disease Control and Prevention’s Tips from Former Smokers campaign. Members of the House of Representatives have proposed eliminating funding for the Tipscampaign, which has been found effective at motivating smokers to quit.

The U.S. Department of Housing and Urban Development issued a final rule that will protect two million residents, including 760,000 children, from the harms of secondhand smoke by making all public housing in the U.S. smokefree. The safeguards will be implemented over a period of 18 months and will be in effect by August 2018. However, the House of Representative’s Freedom Caucus has threatened to repeal this vital and long-awaited health protection.

Tobacco 21 laws have emerged as a new tool for lawmakers. This year’s “State of Tobacco Control” report was expanded to include a grade to track states’ efforts to raise the minimum age of sale for tobacco products to 21. In 2016, California and the District of Columbia took this important step, joining Hawaii, which was the first state to pass a Tobacco 21 law in 2015.

“Close to 95 percent of smokers try their first cigarette before the age of 21,” said Wimmer. “Increasing the minimum sales age of tobacco products to 21 will significantly reduce youth tobacco use and save thousands of lives nationwide.”

“In 2017, the American Lung Association will be working to defend the gains that have been made to combat tobacco use and we will push federal and state leaders to summon the courage to enact policies that will save lives – funding tobacco prevention programs, helping smokers quit and protecting everyone from secondhand smoke,” Wimmer said.

To learn more about federal and state grades from this year’s “State of Tobacco Control” report, visit Lung.org/sotc. For media interested in speaking with an expert about lung health, tobacco use and tobacco policies, contact Allison MacMunn at Media@Lung.org or 312-801-7628.

Study: Prenatal Nicotine Exposure and Risk of Schizophrenia Among Offspring in a National Birth Cohort